Thailand is the country with most buddhists among the country’s population. About 95% of the Thai are Buddhists. 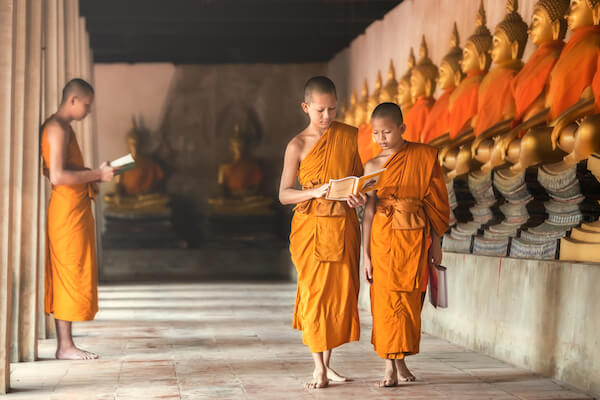 There are over 35,000 temples in Thailand! Among the most well known temples are Wat Rong Khun, the White Temple and Wat Pho, the temple of the reclining Buddha as well as Wat Arun, the temple on the banks of the Chao Phraya River that runs through Bangkok.

Over half of the population live in and around in urban areas. The biggest cities in Thailand are Bangkok, Chon Buri, Samut Prakan and Chiang Mai. Bangkok is the only city in Thailand with more than two million inhabitants.

The most popular sports in Thailand are soccer, volleyball and rugby. Thailand is also known for the Thai Boxing style called Muay Thai.

The rivers in Thailand always were and still are the place where people went to shop for food and goods. Floating markets are not only a tourist attraction but part of Thai daily life. If you want to see how Thai people shop for groceries, you must rise early in the morning to not miss out on a wonderful experience!

Good to know: In Thailand the head is considered a sacred body part, so don’t touch other people’s head! Don’t point with your feet and don’t show the soles of your feet as these are considered the lowest part of your body.

Thailand is the second biggest economy in South East Asia – after Indonesia.

Thailand is one of the largest orchid exporters in the world. In 2018 Thailand exported more than 50,000 tonnes of orchids. Did you know that there are about 1,300 orchid species grown in Thailand’s orchid farms?

The main trading partners of Thailand are China, Japan and the USA. The main export products of Thailand are automobiles, computers, jewellery, gold and precious stones, rubber products and rice and processed food products.

The number of new coronavirus infections reported daily in India dropped below 50,000 nearly after three months.